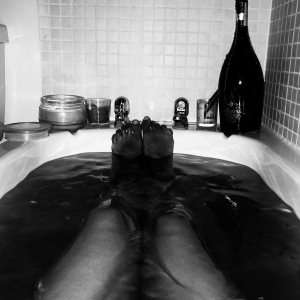 I used to hate baths, mainly because I struggled to relax in them as my thoughts often just run away with themselves. But as I’ve discovered Lush, and a best friend who shares my love of the place, they’ve become something I love and I like to think I do them well.

But, this isn’t a regular “legs in the bath” photograph, it’s what I call “Progress.”

I managed to run this bath myself after eating my first bit of food (jelly and ice cream) during a horrific bout of tonsillitis I’ve been having. It might not seem much but I actually felt worth something, or like I mattered for the first time in 5 days.

It’s been just two weeks since I returned from my sanctuary in Thailand and I assure you nothing can bring you crashing straight back to reality like your body telling you to stop everything it wants to do.

Patience is not really my thing, and yet I’m having to be impatient and listen to it.

This week I’ve realised that I’m not just battling a physical illness here my mental one has returned:

Having used exercise and diet as a way to self-medicate myself to happiness over recent months, and with success, this past week I have had that all of that taken away and instead have been left with the four walls of whichever room I’ve been laid up in at that time. 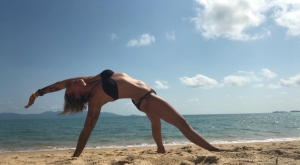 Hard to believe this was me two weeks ago!

I’ve felt the most isolated and alone I’ve ever felt these past 5 days. It had me thinking that I wished I’d never taken for granted the ways in which the person I love most had looked after me at points like this .

I urge you all to cherish those moments both during and after if you have someone that looks after you in that way and express gratitude too.

Isolation isn’t great, there’s only so much social interaction you can actually really get  through a phone – and I’m realising how superficial some of those encounters can be too – but that’s another post.

Experiencing a bit of human contact today, someone that wasn’t a doctor felt incredible. I wanted to beg my Mum not to leave when she had to, but the voice inside my head said not to make myself more of a burden – and there’s the anxiety.

As I lay in the bath I put on a song played to me by one of the inspiring yoginis I met at The Sanctuary and closed my eyes soaking up the smells of the lavender, the warmth of bath and took myself back to where I was at the exact point that song was played. My happy place. I smiled and for a moment I got some perspective, that I gained while there, back.

Unfortunately getting out the bath bought chills, aches and a realisation that my mind is working over time once again, but I’m attempting to clutch onto that smile I managed to grab today.

This post may sound a little bit “poor me,” or it may not, but I’ll leave it here for now and reflect and hope that it’s just the anxiety talking.

When I’m not sat behind a desk earning the pennies or cuddling my fur babies you’ll often find me sneaking teaspoons of peanut butter from the jar, reading self-help books, or listening to music – I rarely watch TV unless a Netflix series grabs me. View all posts by Nadya

This site uses Akismet to reduce spam. Learn how your comment data is processed.

When I’m not sat behind a desk earning the pennies or cuddling my fur babies you’ll often find me sneaking teaspoons of peanut butter from the jar, reading self-help books, or listening to music – I rarely watch TV unless a Netflix series grabs me.

I’m keen to hear your thoughts on Nerves and Nibbles, maybe you’ve tried a recipe, read a post or have some ideas – reach out.